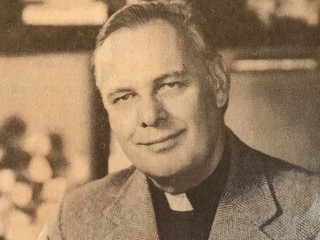 The Reverend William R. Snyder passed peacefully away in his daughter Aline’s home in Phoenix, AZ in the early evening of December 23, 2020. He was born March 13, 1928 in Dallastown, PA, son of the late William L and Mary Snyder. The heavenly host choir received a new member in time to celebrate our Lord’s birth with his joyous singing. He was predeceased by his beloved wife of 60 years, Margaret. He is survived by son William D. Snyder, MD (Patricia), daughters Laurina Beno (Jon) and M Aline Snyder, CRNA. He is also survived by six grandchildren and four great-grandchildren, a sister Ann Jackson (Don), two sister’s-in-law Barbara McKinney and Mildred Goodson and numerous nieces and nephews. He was predeceased by brother Charles and brother-in-law David Goodson.

Bill signed professional correspondence “In His service…,” but this wasn’t a platitude, it’s how he truly lived his life. He was a small-town boy whose life-journey had him going from a town of less than 3,000 to meeting the Queen of England to standing before the US Congress offering an invocation. Yet he never forgot his small-town roots.

Bill graduated from Dallastown High School in 1946, Gettysburg College in 1950 and then Gettysburg Theological Seminary, graduating in 1954. During his academic career he excelled in both academics and extracurriculars, often taking the lead (editor of both HS and College newspapers and yearbooks, president of his HS class all four years, captain of his HS basketball team, and president of his college fraternity chapter of Lambda Chi Alpha).

As his professional career began, he found himself the youngest Senior Pastor twice over (both at St Luke’s Lutheran Church in Cumberland, MD in 1955 and at St John’s Lutheran Church in Minneapolis, MN in 1960). He was talented and creative in his professional life which led to numerous successes and accolades. He shepherded St Luke’s from the breaking of ground to the completion of building a new church during his tenure; he was called to St John’s Lutheran Church in 1960, where he served faithfully and diligently with Margaret as his helpmate until retiring in 1992. He integrated St John’s in the early ‘60s; he conceived of starting a church camp (that came to be called Chi Rho Camp) which, under his leadership, offered camp experiences gratis to underserved communities such as AFDC (now TANF) mothers and their children, and to LD students, using licensed volunteer educators to tutor students in reading and math skills; he gained national attention in Time Magazine in 1963 for creating an innovative church study group called Koinonia, which brought teachings of religion and Biblical history into the perspective of everyday living, causing Pastors nationwide to contact him to learn how they, too, could participate in this effective ministry; he was President of the Minneapolis Ministerial Association; was on the Board of Directors for the Minneapolis Council of Churches; he accepted an invitation in 1967 to preach in England and Ireland on a Minister Exchange by the joint sponsorship of the  National Council of Churches and the British Council of Churches (where he and Margaret met Queen Elizabeth at a garden party at Buckingham Palace — again, he was one of the youngest Pastors ever to participate). A gifted preacher, he had many requests made over decades for sermon reprints from parishioners;  some sermons even garnered local and national attention when published in these arenas; as an adjunct professor taught preaching at Luther Seminary in St. Paul, MN for ten years.

With his deep sense of the importance in reaching out and creating acceptance and understanding, he created ecumenical groups in the ‘70s in MPLS between Protestant, Catholic, and Jewish pastors/priests/rabbis when this was daring and experimental —  one of which, TRUST, remains active today, serving as a model for interdenominational church groups; he served on the boards of many lay service organizations such as Salvation Army and Loaves and Fishes. Always a strong community outreach proponent, he was President of the MPLS Kiwanis Club in the ‘80s, where he championed the inclusion of women as club members; he served on boards for a variety of different civic organizations, the one common thread to each being that it added to the health and welfare of members of the communities they served, such as MACLD (now LDA Minnesota), Hennepin County Board for Mental Health and Mental Retardation, board member for Metropolitan-Mt Sinai Medical Center, Guthrie Theater, MPLS Council of Churches, the MN Synod (two terms in the ‘70s); and Martin Luther Manor Assisted Living.

He had a unique relationship with the Minnesota Orchestra due to several church members being musicians and the assistant director being the St John’s choir director, which led to many creative and interesting collaborations between church and orchestra; he was invited to deliver the invocation at the opening session of the US Congress in the Capital building in Washington D.C. in 1989. He brought to ministries both within the church and civic communities strength and energy which inevitably led to innovation and progress. Bill freely gave of his time and talents whenever he was called upon to do so. He was an active Rotarian after retirement, offering a weekly prayer for his chapter. He led a Bible Study for his church while “retired” for twenty-plus years, and he continued to spiritually minister to members of his three (two former) churches, still officiating baptisms, weddings and funerals as well as preaching (several times returning to St Luke’s in MD, as well as guest preaching at his current church) well into his eighties (he never really “retired”). He was always available to share a word of comfort through his patient listening and benevolent Pastoral counseling to those seeking this from him, all while being a loving and present father and grandfather.

Bill maintained curiosity throughout his life. He loved following sports and politics, and had a thirst for travel, forming numerous bonds of close friendships across Great Britain and the European continent, each of which lasted for his lifetime. He loved music and singing, especially in church where his distinctive booming baritone could often be heard over the choir’s voices. Being social was his pastime. At any gathering he’d be in the center of these events, holding court telling his life’s anecdotes sprinkled liberally with his famous sense of humor. Once Bill had touched someone’s life or the life of an institution or church, he was forever a part of that life, institution or church, due to the deep compassion and caring he displayed towards the person, the cause, or the spiritual community.

Bill was sincerely and deeply loved, and will truly and irrevocably be missed. His Memorial Service will be held in the fall (date TBD) of 2021 at Shepherd of the Hills Lutheran Church in Fountain Hills, postponed due to current COVID concerns regarding travel.